We drove to Matera yesterday and could not find a room so we drove back to Altamura and spent the night there in a lovely hotel, Hotel San Nicola. We toured the sights in that town but they did not have a room for the next two nights so we left and drove back toward Matera. I was determined to see Matera. As we approached the town we saw a Hilton Garden Inn and headed for it. They had a room for tonight and the next night so we decided to splurge and spend two nights. We headed into the city and towards all signs that said sassi (stone in English). We had a difficult time maneuvering the streets and traffic but finally found the entrance to sassi. A tourist office told us where to park and after circling around twice we finally found it. We found another tourist office and booked a tour. We had two hours to kill so we walked towards a plaza and stepped up to a balcony and got our first glance of sassi. It was an astounding sight. Then we went to see a church and a wedding was taking place and we sat down and watched the wedding and soaked in the beauty of the church. Then we waited outside and saw the bride and groom exit the church with their families throwing rice at the bride and groom and celebrating. I love watching it all. Then we met our guide and realized we were the only tourists on the tour. We loved our guide and he took his time explaining the history of this incredible sight. This area has been settled since the Palaeolithic. The city was allegedly founded by the Romans in the 3rd century BC, with the name Matheola.
Matera has gained international fame for its ancient town, the Sassi di Matera (meaning stones of Matera”). The dwellings are thought to be among the first ever human settlements in what is now Italy. In 1958 the last inhabitants were forced to leave. In 1993 Sassi was declared a UNESCO World Heritage Site. 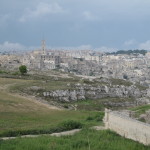 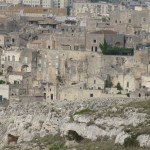 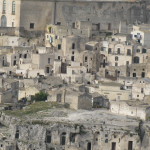 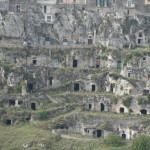 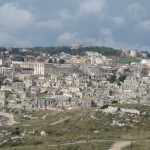