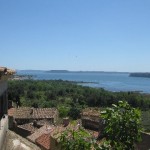 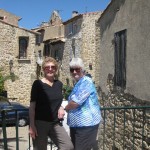 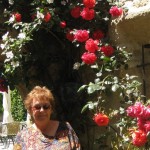 We drove today to Aix de Provence and as we were driving around I recognized where we had a meal with our friends Rod and Emily several years ago.  Susan recognized it too.  We decided to buy gas and Susan pulled up to a pump and it was Lola’s turn to buy gas so she went in to pay.  She came back and said that pump only accepted certain cards.  Susan pulled up to another pump and it was out of diesel.  She tried to pull up to another pump and a motorcycle was parked there.  The fourth pump worked.  Lola had gone in to pay four times and everyone in the store was cracking up.

Driving back toward Arles we drove up to a toll booth but we hadn’t gotten a ticket when we got on the autovia so we had no ticket to put in the slot to show how much we had to pay.  We learned after our last incident to press the red button so she pushed it and got a recording in French (of course).  She pushed another button and a person came on and Susan explained in French that we didn’t have a ticket and the machine came up saying we owed 1.80 Euros.  We paid and voila! The gate went up.  We drove to Miramas Le Vieux and had another great lunch at Le Manjador.  The chef even came out and shook our hands and later asked if we enjoyed our meal.  We drove on up the hill and discovered a medieval village.  We walked around the village and it was adorable.  People were living there and I’m sure behind the stone walls were beautiful homes.  On the way back to Arles we saw a sign saying Roman Aqueduct.  We found the ruins and it was an amazing thing to see.  There was a group of artist there sketching and painting the ruins.  Returning to our hotel proved exhausting.  The narrow little streets are one way and we were about a block and a half from our hotel and couldn’t get there.  Susan was now tired and irritated, I was hysterical, Lola was thinking “This is France.” and Barbara was calm but silently sobbing.  I hysterically demanded that Susan park the car and we would get the hotel guy (who parks the cars at the hotel) to come and get the car.  She found a park space (a miracle) and it was so tight she couldn’t get out the driver’s door.  I refused to take a picture of her trying to squeeze through the narrow space.  She somehow climbed over the stick shift, console and brake to get out the passenger door.  We walked 2 blocks to our hotel and the young man who parks the cars said he would go and get the car.  I walked with him to show him where we were parked.  I discovered his father was American and his mother was French and he was raised in Dayton, Ohio.  He came to Arles to visit his uncle who owns the hotel and never left.  That was 10 years ago.  He drove the car to the hotel, dropped me off and I joined the other three old  broads who were waiting for me.  Exhausted we all sat in the shade under the umbrellas in Forum Plaza and drank a couple glasses of wine. 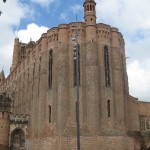 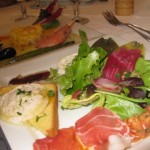 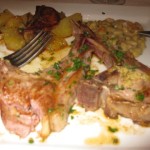 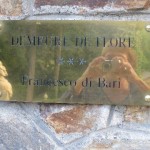 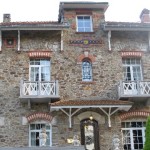 What a delightful stay we had at the Demeure de Flore Hotel in Lacabarede, France.  Our host was Francesco di Bari and his motto is la passione..il gusto.  After we settled in we went to the lounge and Francesco served us wine and delighted us by telling interesting stories about his visit to California 20 years ago.  He told us dinner would be shrimp ravioli, veal and chocolate cake.  Not only was he our host he was the chef also.  Dinner was beautifully presented and delicious.  It was a real treat staying at a ***hotel.  It was a magnificent hotel. 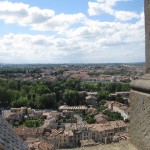 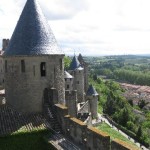 We got up this morning and said goodbye to Bruno at Hotel Aragon.  Bruno told us a story about his father’s life  being saved by American soldiers during WWII.  His father was only five years old and his grandmother would never talk about the incident.  All she would say was “The Germans were here.”  So, no one knows what happened.

We drove to Albi and visited the magnificent cathedral.  Then we went to lunch, which was fabulous.  We walked to the Toulouse Lautrec Museum and spent a couple of hours looking at his art work.  It was amazing and I love his work.  He is one of my favorite artists.  Lola and Barbara bought posters.  When we got ready to leave the parking lot which was three floors underground we couldn’t get the gate to go up.  We put the ticket in the machine and it said we owed 7.30 Euros but there was no where to put in the money.  Panic set in.  I got out and went to the car in back of us and said we didn’t know what to do.  The lady passenger got out and ask me if we had paid and I said no.  We had to go to the 1st floor and pay first.  Lola took the ticket and paid while we drove around the parking garage.  We left Albi and headed east.  We searched for a hotel with no success.  I put an address in the Garmin for a Best Western Hotel in Castres and it was a dump and not a Best Western.  Now the search was on.  We went to the tourist office and asked for a three star hotel.  There was none in that city.  He directed us to a three star hotel 15 miles away called Demeure de Flore.  It is gorgeous and I know we will have a great time.

We arrive in Le Cite which is the town around the walls of Carcassone.   Carcassone has been inhabited from ancient times and most of the ramparts were constructed in the 12th and 13th century.  We got a room at Hotel Aragon and went inside the walls to have lunch.  We stopped at a restaurant named Maison du Cassoulet.  They were very busy but sat us up outside.  We waited for about 20 minutes and then Lola went in and asked for three glasses of red wine and one of white.  Then about 20 minutes later we got the three glasses of red wine but no white.  Lola went in again and asked for a glass of wine and finally returned with her glass.  We waited another 45 minutes for the waitress to take our order but she never came.  After another 15 minutes we just got up and left and never paid for the wine.  As we left we told several people looking at the menu not to go in as the service was lousy.

Now we are at Le Mets Dieval and at 3:00 p.m. we finally got a lunch plate.  I had a bean cassoulet with duck and sausage.  It was very good.  Then we walked around the castle and Barbara went back to her room and Susan, Lola and I walked all around the castle on the ramparts.  Lola returned to her room and Susan and I went to see the church Basilique des Saints Nazaire.  While touring the inside of the church a group of four men burst into song and the singing certainly went with the mood of the church.  Everything was beautiful.  They sang two songs and then thanked us for listening and offered a CD for us to buy.